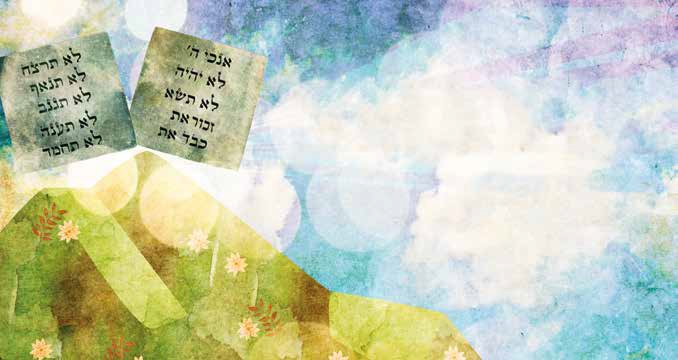 Moses’ father-in-law, Jethro, hears of the great miracles which G‑d performed for the people of Israel, and comes from Midian to the Israelite camp, bringing with him Moses’ wife and two sons. Jethro advises Moses to appoint a hierarchy of magistrates and judges to assist him in the task of governing and administering justice to the people.

The children of Israel camp opposite Mount Sinai, where they are told that G‑d has chosenthem to be His “kingdom of priests” and “holy nation.” The people respond by proclaiming, “All that G‑d has spoken, we shall do.”

On the sixth day of the third month (Sivan), seven weeks after the Exodus, the entire nation of Israel assembles at the foot of Mount Sinai for the Giving of the Torah . G‑d descends on the mountain amidst thunder, lightning, billows of smoke and the blast of the shofar, and summons Moses to ascend.

G‑d proclaims the Ten Commandments, commanding the people of Israel to believe in G‑d, not to worship idols or take G‑d’s name in vain, to keep the Shabbat, honor their parents, not to murder, not to commit adultery, not to steal, and not to bear false witnessor covet another’s property. The people cry out to Moses that the revelation is too intense for them to bear, begging him to receive the Torah from G‑d and convey it to them.