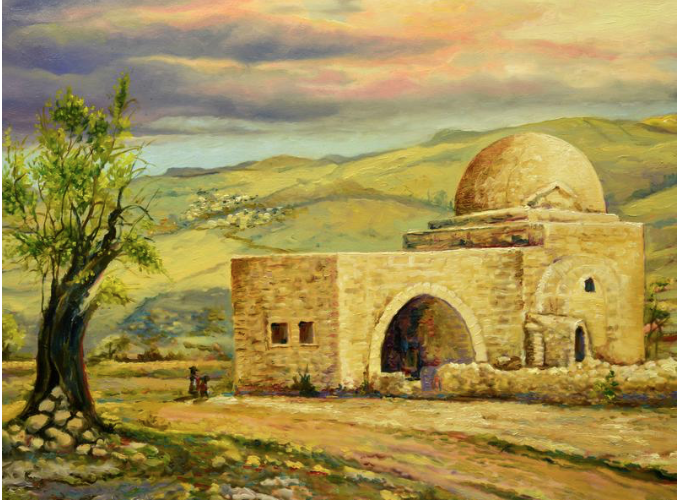 Jacob returns to the Holy Land after a 20-year stay in Charan, and sends angel-emissaries to Esau in hope of a reconciliation, but his messengers report that his brother is on the warpath with 400 armed men. Jacob prepares for war, prays, and sends Esau a large gift (consisting of hundreds of heads of livestock) to appease him.

That night, Jacob ferries his family and possessions across the Jabbok River; he, however, remains behind and encounters the angel that embodies the spirit of Esau, with whom he wrestles until daybreak. Jacob suffers a dislocated hip but vanquishes the supernal creature, who bestows on him the name Israel, which means “he who prevails over the divine.”

Jacob and Esau meet, embrace and kiss, but part ways. Jacob purchases a plot of land near Shechem, whose crown prince—also called Shechem— abducts and rapes Jacob’s daughter Dinah. Dinah’s brothers Simeon and Levi avenge the deed by killing all male inhabitants of the city , after rendering them vulnerable by convincing them to circumcise themselves.

Jacob journeys on. Rachel dies while giving birth to her second son, Benjamin, and is buried in a roadside grave near Bethlehem. Reuben loses the birthright because he interferes with his father’s marital life. Jacob arrives in Hebron, to his father Isaac, who later dies at age 180. (Rebecca has passed away before Jacob’s arrival.)

Our Parshah concludes with a detailed account of Esau’s wives, children and grandchildren; the family histories of the people of Seir, among whom Esau settled; and a list of the eight kings who ruled Edom, the land of Esau’s and Seir’s descendants.