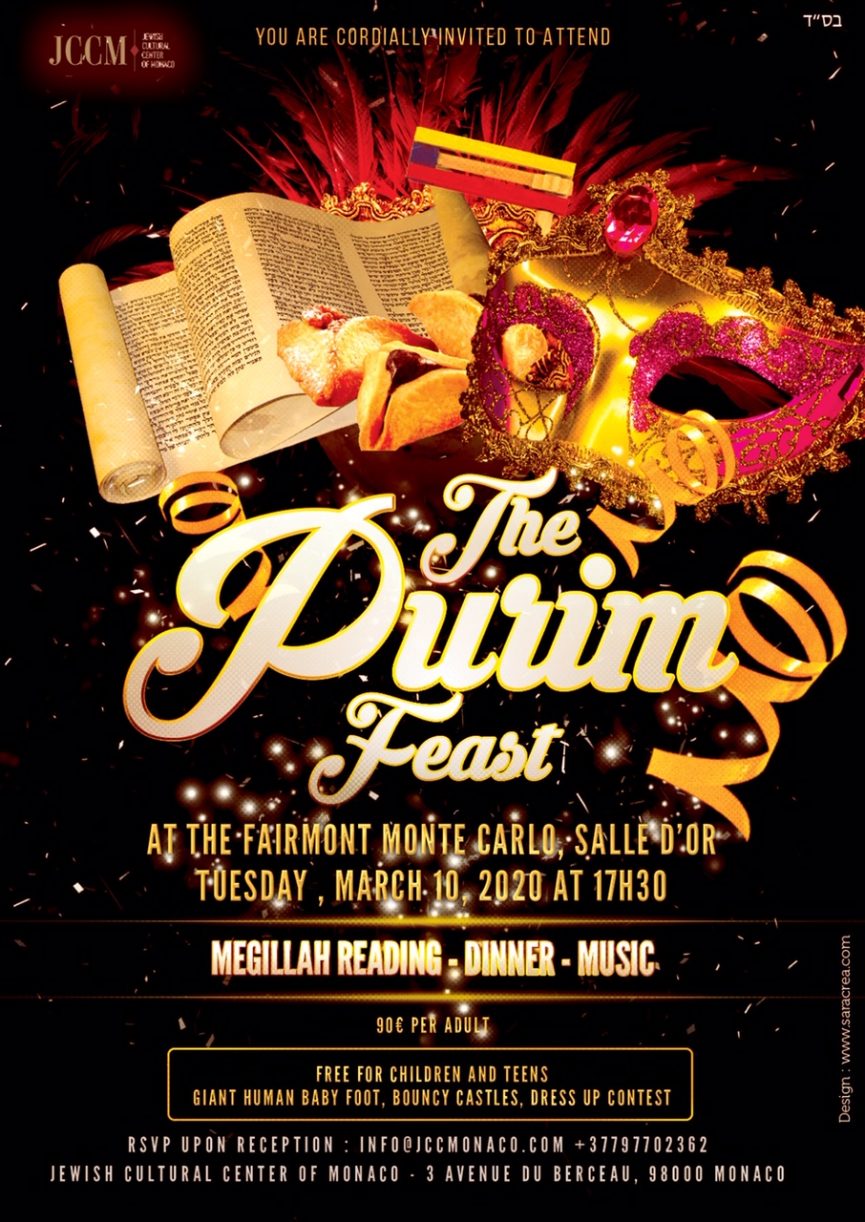 Purim program at the JCCM Monaco:

Reading of the Megillah: 19:00
followed by a Break Fast

Purim How-To Guide
Your Purim 2020 guide contains the story of Purim, and all you need to know about the 4 mitzvahs of Purim and the other observances of the day
Purim, celebrated on the 14th of Adar, is the most fun-filled, action-packed day of the Jewish year. It commemorates our nation’s miraculous salvation more than two millennia ago. Purim 2020 begins Monday night, March 9 and continues through Tuesday, March 10.

The Purim Story in a Nutshell

The Persian empire of the 4th century BCE extended over 127 lands, and all the Jews were its subjects. When King Ahasuerus had his wife, Queen Vashti, executed for failing to follow his orders, he orchestrated a beauty pageant to find a new queen. A Jewish girl, Esther, found favor in his eyes and became the new queen—though she refused to divulge the identity of her nationality.

Meanwhile, the antisemitic Haman was appointed prime minister of the empire. Mordechai, the leader of the Jews (and Esther’s cousin), defied the king’s orders and refused to bow to Haman. Haman was incensed, and convinced the king to issue a decree ordering the extermination of all the Jews on the 13th of Adar—a date chosen by a lottery Haman made (hence the name Purim, “lots”).

Mordechai galvanized all the Jews, convincing them to repent, fast and pray to G‑d. Meanwhile, Esther asked the king and Haman to join her for a feast. At the feast, Esther revealed to the king her Jewish identity. Haman was hanged, Mordechai was appointed prime minister in his stead, and a new decree was issued granting the Jews the right to defend themselves against their enemies.

How We Celebrate Purim
Though we dress up in holiday finery, Purim doesn’t feature holiday work restrictions. Nonetheless, all the better if you can take the day off from work and focus on the holiday and its four special mitzvahs:

(Note: If you are spending Purim in Jerusalem, the laws vary. Click here for details.)

An ad hoc Megillah reading at a restaurant.
Head to your synagogue to hear the whole Megillah. The Megillah, a.k.a. “The Book of Esther,” is the scroll that tells the Purim story. Listen to the public reading twice: once on Purim night, and again on Purim day. This year, that’s Monday night, March 9 and Tuesday, March 10. Pay attention—it is crucial to hear every word.

When Haman’s name is mentioned (Chabad custom is that this is only when it is accompanied with a title), you can twirl graggers (noisemakers) or stamp your feet to eradicate his evil name. Tell your kids that Purim is the only time when it’s a encouraged to make noise during services!

The Megillah is read from a handwritten parchment scroll, using an age-old tune. Contact your local Chabad rabbi if for any reason you can’t make it to your synagogue for the Megillah reading. He’ll do his best to send a Megillah reader to your home or office.

2. Give to the Needy (Matanot LaEvyonim)

One of Purim’s primary themes is Jewish unity. Haman tried to kill us all, we were all in danger together, so we celebrate together too. Hence, on Purim day we place special emphasis on caring for the less fortunate.

Give money or food to at least two needy people during the daylight hours of Purim, March 10. In case you can’t find any needy people, your synagogue will likely be collecting money for this purpose. At least, place two coins in a charity box earmarked for the poor.

On Purim, we give a donation to whoever asks; we don’t verify his or her bank balance first.

As with the other mitzvahs of Purim, even small children should fulfill this mitzvah.

On Purim we emphasize the importance of friendship and community by sending gifts of food to friends.

On Purim day, March 10, send a package containing at least two different ready-to-eat food items and/or beverages (e.g., pastry, fruit, beverage) to at least one Jewish acquaintance during the daylight hours of Purim. Men send to men, and women to women.

It is preferable that the gifts be delivered via a third party. Children, in addition to sending their own gifts of food to their friends, make enthusiastic messengers.

During the course of Purim day, March 10, gather your family, maybe invite a guest or two, and celebrate with a festive Purim meal. Traditionally, this meal begins before sundown and lasts well into the evening.

The table should be festively bedecked with a nice tablecloth and candles. Wash for bread or challah, and enjoy a meal featuring meat, wine and plenty of Jewish songs, words of Torah and joyous Purim spirit. Sing, drink, laugh, have fun together.

Note: When Purim falls on a Friday, out of deference to the approaching Shabbat, we start the meal earlier, ideally before midday.

On Purim, we include the brief V’al Hanissim section in all the day’s prayers, as well as in the day’s Grace after Meals. This prayer describes the Purim story and thanks G‑d for the “miracles, redemptions, mighty deeds, saving acts and wonders” that He wrought for our ancestors on this day many years ago.

In the morning service there is a special Torah reading (Exodus 17:8–16), describing the battle Joshua waged against Amalek—Haman’s ancestral nation—almost one thousand years before the Purim events unfolded. If you did not hear this reading on the Shabbat before Purim (see below), make sure to listen now.

On Purim, children—and some adventurous adults too—traditionally dress in costumes, an allusion to G‑d’s hand in the Purim miracle, which was disguised by natural events. Make sure your children masquerade as good, cheerful characters, such as Mordechai and Esther.

Before Purim: Torah Reading of Zachor
On the Shabbat before Purim (this year, March 7), a special reading is held in the synagogue. We read the Torah section called Zachor (“Remember”), in which we are enjoined to remember the deeds of (the nation of) Amalek (Haman’s ancestor), who sought to destroy the Jewish people.

Before Purim: The Fast of Esther
To commemorate the prayer and fasting that the Jewish people held during the Purim story, we fast on the day before Purim. This year we fast on Monday, March 9. The fast begins approximately an hour before sunrise, and lasts until nightfall. Click here for exact times for your location.

Before Purim: The “Half Coins” (Machatzit HaShekel)
It is a tradition to give three coins in “half” denominations—e.g., three half-dollar coins—to charity, to commemorate the half-shekel that each Jew contributed as his share in the communal offerings in the time of the Holy Temple. This custom, usually performed in the synagogue, is done on the afternoon of the “Fast of Esther,” or before the reading of the Megillah.

Shushan Purim
In certain ancient walled cities—Jerusalem is the primary example—Purim is observed not on the 14th of Adar (the date of its observance everywhere else), but on the 15th of Adar. This is to commemorate the fact that in the ancient walled city of Shushan, where the battles between the Jews and their enemies extended for an additional day, the original Purim celebration was held on the 15th of Adar.

The 15th of Adar is thus called “Shushan Purim,” and is a day of joy and celebration also in those places where it is not observed as the actual Purim.

Please find below the times of Shabbat:
Minha 16:45