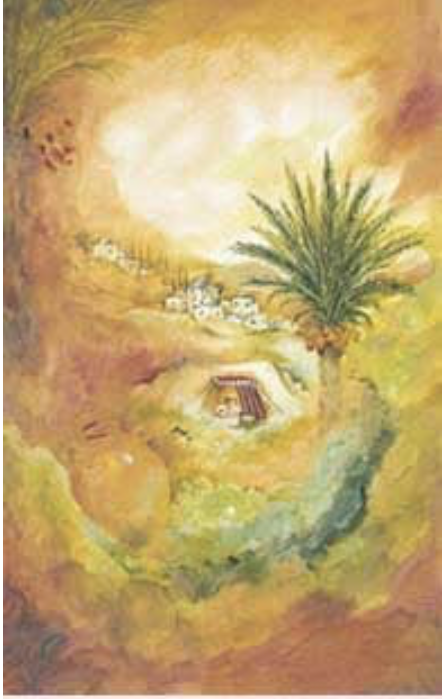 In the Parshah of Eikev (“Because”), Mosescontinues his closing address to the children of Israel, promising them that if they will fulfill the commandments (mitzvot) of the Torah, they will prosper in the Land they are about to conquer and settle in keeping with G‑d’s promise to their forefathers.

Moses also rebukes them for their failings in their first generation as a people, recalling their worship of the Golden Calf, the rebellion of Korach, the sin of the spies, their angering of G‑d at Taveirah, Massah and Kivrot Hataavah (“The Graves of Lust”). “You have been rebellious against G‑d,” he says to them, “since the day I knew you.” But he also speaks of G‑d’s forgiveness of their sins, and the Second Tablets which G‑d inscribed and gave to them following their repentance.

Their forty years in the desert, says Moses to the people, during which G‑d sustained them with daily manna from heaven, was to teach them “that man does not live on breadalone, but by the utterance of G‑d’s mouth does man live.”

Moses describes the land they are about to enter as “flowing with milk and honey,” blessed with the “seven kinds” (wheat, barley, grapevines, figs, pomegranates, olive oil and dates), and as the place that is the focus of G‑d’s providence of His world. He commands them to destroy the idols of the land’s former masters, and to beware lest they become haughty and begin to believe that “my power and the might of my hand have gotten me this wealth.”

A key passage in our Parshah is the second chapter of the Shema, which repeats the fundamental mitzvot enumerated in the Shema’s first chapter, and describes the rewardsof fulfilling G‑d’s commandments and the adverse results (famine and exile) of their neglect. It is also the source of the precept of prayer, and includes a reference to the resurrection of the dead in the messianic age.